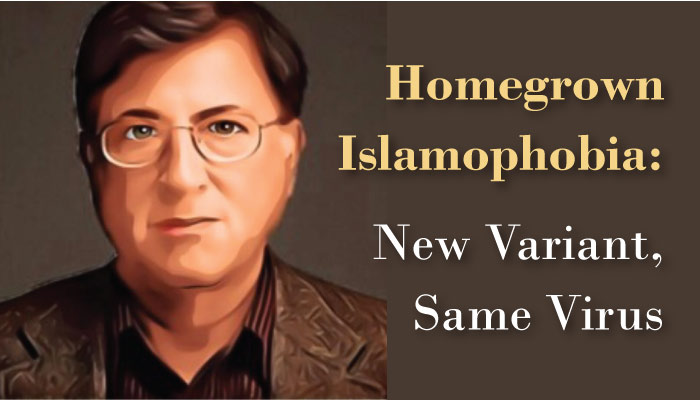 Western societies are often perplexed, even horrified, when a (brown) extremist/ terrorist surfaces in their own backyard. The consternation is much less when s/he hails from the expected hot spots in the non-West, those ‘dens of terror’ for some Western pundits.l

But why the double standards, why the inconsistency of the reaction? The assumption is there is something intrinsic about Western society that prevents extremism, radicalization, and violence. And conversely, that those ‘other’ societies inherently contain the seeds of such phenomena.l

Similarly, in Muslim societies such as Pakistan, we tend to see the emergence of the Islamophobia industry as a purely external enterprise.l

The overwhelming evidence demonstrates that this is a mistake. There should be no surprise – though disappointment is warranted – at native, homegrown Islamophobia.l

Prof. Pervez Hoodhboy has been one of Pakistan’s finest educators. But time and again, his wild rhetorical flourishes in the public domain do a great disservice to cultivating intelligent discourse in the country.l

There seems to be a spectre that haunts Hoodbhoy. It is not the spectre of Islam but of a caricature of Islam/Muslims which he has concocted over the years.l

But what motivates Hoodbhoy to incessantly stir up hysteria whenever anything related to Islam sees the light of day? Why does he do his best to create a moral panic amongst the educated classes in the country when Islam somehow escapes the dark abyss to which it had been relegated for many decades?l

Why, in short, does Hoodbhoy fear Muslims?l

Hoodbhoy, as we all know, is not alone here. He is joined by prominent politicians and intellectuals in the West and the non-West. They come from France and Hungary, as well as from India and Myanmar.l

We can call this network of like-minded individuals and organizations the ‘Islamophobia International.’ What unites them is anti-Muslim racism. What unites them is seeing every Muslim as a violent extremist/terrorist, a barbarian from centuries ago.l

Hence, if that is the way you see all of Islam/Muslims, then Hoodbhoy’s fear of Muslims or anything Islamic(ate) is understandable.l

Hoodbhoy seems more outraged than usual these days. He has to engage and teach Muslims in his homeland, and those Muslims – through their representatives – often seek public policy in line with their shared beliefs and values.l

In other societies, the Hoodbhoys of the world would understand this as normal politics. In Pakistan, however, there is – and can be – no politics. According to our secular moderns, Pakistanis are not sufficiently ‘developed,’ must first undergo and graduate from the stage where they dispense with their faith traditions – and only then can do mature politics.l

At present, Islamophobes view Pakistan as replete with barbaric hordes of primitives inching towards their ‘Islamo-fascist’ utopia.l

Anatol Lieven should have known better. Pakistan is not a ‘hard country’ after all, at least if one gives credence to Hoodbhoy’s (and the like) farcical fantasies.l

Indeed, it is precisely mature and robust Muslim political participation that bothers politicians and ‘enlightened’ intellectuals elsewhere where Muslims are a minority. The fact that Muslims have begun to confidently assert a public identity, with reasonable demands as citizens, is the problem. As long as they were solely and exclusively some arbitrarily and often clumsily defined race/ethnicity (black, Asian, Bangladeshi, Turkish, Algerian, etc), Muslims could at least have a shot – perhaps a long shot – at becoming fully French, for example.l

However, when their Muslim identity becomes salient, as it did in Britain after the Muslim mobilization against The Satanic Verses in 1989, or after the hijab affair in France in the 1990s – then all of a sudden we have a ‘crisis of Islam’ (Macron) and a nearly insurmountable problem of ‘integration/assimilation.’l

And so has been the case throughout the 20th century in many of the postcolonial regimes of the Muslim world. After the end of World War I, there was a systematic attempt to oust any public (and sometimes private, too) ‘remnants’ of Islam, and define the modernization project as being synonymous with Westernization. This phenomenon became known as Kemalism, and it was certainly not simply limited to Turkey.l

This worldview crucially meant dumping any faith-affirming consciousness that could inspire an emancipatory and just vision in the modern, postcolonial world.l

Pakistan was a sincere effort to disrupt the Kemalist trajectory, but the country’s elites failed to live up to the vision and promise of the new nation – a hopeful ‘new Medina,’ not just another ordinary nation-state.l

It is in that hegemonic global project to erase Islam that we come to grasp a more meaningful understanding of the roots of modern Islamophobia.l

Thus, Islamophobia – as the APPG in the UK suggests – is the regulation, disciplining, and punishment of ‘muslimness’ and expressions of ‘muslimness.’l

This is what explains Hoodbhoy’s outrageous comments describing female students in universities who don the niqab as ‘abnormal,’ or slanderously accusing a fellow academic discussing the Single National Curriculum (his latest obsession) as desiring to bring TTP-like terror to the country. And the list of absurd obscenities goes on.l

This is not meant to be an ad hominem against Prof. Pervez Hoodbhoy. Undoubtedly, he has committed himself for decades to be a laudable teacher of physics to our young students. The country owes him a debt for that.l

But the harm must not also be overlooked. When you impoverish reasoned public debate by outlandish claims, you hollow out the very democracy for which you claim to stand. Democratic culture becomes debased because you have, as Julien Benda called it, the ‘treason of the intellectuals’ – the betrayal of a class, their willful participation in degrading public debate in the service of a narrative/ideology utterly at odds with the needs, values, and interests of the people.l

Hoodbhoy and others adhere to a core principle of modern Islamophobia: Muslims cannot have any political agency and that Islamicate societies must have no autonomy or sovereignty over themselves.l

The late great Christian Palestinian-American intellectual, Edward W. Said, was asked once about what role religion had in the Middle East. He unashamedly acknowledged that his civilization was Islamic(ate) – richly influenced by the ethos of Islam, inspiring centuries of inter-communal coexistence, respect, and flourishing, at least until colonialism and modern foreign interventions.l

Of course, one can hear the retort right away: but Islam spread violently by the sword and annihilated other religions that came under its dominion. If that were really the case, it surely did a bad job. There are plenty of non-Muslim religious communities throughout the Muslim-majority world (compare that, say, with the UK where no pre-Christian communities survived and exist as minorities today), Islam became the dominant religion of countries like Iran only centuries after arriving there (that doesn’t look like ‘convert or die’ to me), and the largest Muslim country today, Indonesia, never saw any Muslim army come to its shores. Islam came there as to many other places through Sufis and traders.l

The idea there can be an Islamicate Pakistan that embodies a Muslim ethos of justice and pluralistic peaceful coexistence, or inter-communal harmony, seems to be anathema to the secular imagination. That dogmatic worldview cannot grasp the fact that Muslim Andalusia, for example, had no need for ad nauseum debate whether its political-governing authority was religious or secular. The broad faith-affirming popular consciousness was sufficient for justice and fairness. The socio-political-theological milieu was conducive for the different religious communities to not only coexist but to flourish and prosper in so many different domains.l

Those various faith-affirming communities could coexist peacefully without a ‘neutral secular state’ to bludgeon them into ‘good behavior’ – seems preposterous to a good chunk of our enlightened intellectuals. But many people find the latter’s claims of being neutral towards believers equally preposterous, considering the way many secular moderns are dripping in contempt for the (‘superstitious/kooky’) believers.l

If only this punditocracy would demonstrate a little less contempt about the social majorities they plan to liberate, save, enlighten, and reform.l

That colonial logic and impulse has never worked with our people, but certainly has with sections of our intellectuals and elites.l

In the same vein, Hoodbhoy’s latest crusade against the SNC reflects this colonial outlook. If the threat of the SNC is the equivalent to that of the TTP, then perhaps Hoodbhoy will naturally be disposed to his default position in such situations: advocate that our armed forces violently engage in another ‘war on terror.’l

And if our military does not seem so keen on embracing such a comical proposition, Hoodbhoy may do well in calling upon the services of NATO. After all, NATO does seem to be jobless in our region since August 15, 2021. However, unfortunately for Hoodbhoy, most Pakistanis probably want to keep it that way.l

Some dream of the day our intellectuals begin to engage and learn from their counterparts in other parts of Asia, Africa, and Latin America involved in genuine decolonization of the mind, and of the heart. We may then be spared the endless platitudes and shibboleths intended to remind us how backward we and our faith traditions are, and that we believers senselessly confuse where religion should end and politics should begin.l

Gandhi of course thought differently when asserting that those whom believe that politics and religion should be kept separate have no understanding of either.l

In this regard, it has been instructive how certain faith-affirming socio-political movements, with leaders like Gandhi in the Subcontinent and Martin Luther King, Jr. in the US, are considered kosher forms of mixing religion and politics. On the other hand, an Islamic faith-affirming socio-political consciousness becomes automatically suspect (regardless of its content and substance) and needs immediate disciplining.l

Nevertheless, we could certainly imagine a far more productive counterfactual: if Prof. Hoodbhoy, instead of making outrageous claims meant to aimlessly incite and recklessly provoke, actually participated in a healthy democratic debate on how to meaningfully advance a just and inclusive Islamicate ethos. But for that, he would have to forego his prejudice towards expressions of muslimness. That may be asking for too much in his case.l

Indeed, the gospel of a dedicated Islamophobe – as with all Western supremacists – is zero tolerance of alternative modernities, especially ones that de-center and interrogate the ‘sacred cows’ of one particular form: Eurocentric, colonial modernity.l

Like their counterparts, Muslim Islamophobes only understand history as a ‘miraculous’ progress narrative of the West that seamlessly goes from Plato to NATO. The history of the Islamicate and all other traditions and civilizations are simply inconvenient footnotes to the One Big Story.l

It is the successful, gradual unsettling and disruption of that Eurocentric story that are producing panicky reactions such as Islamophobia and the rise of the revanchist far right.l

Ultimately, in the case of Hoodbhoy – his silly posturing does not merely reinforce extremist positions of all shades. That would be giving it too much credit. It does something worse: it cheapens and impoverishes intelligent public discussion so hideously that thoughtful, coherent, well-reasoned positions have no room to even exist.l

Hardly the contribution one would expect from someone thought of as the epitome of rationality, someone so desperate to save us from…ourselves. l