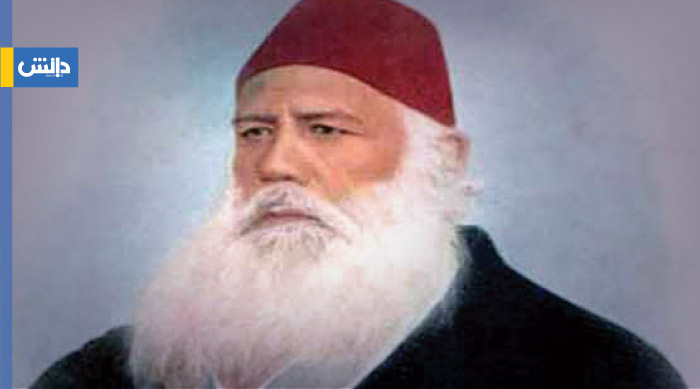 We cannot repudiate the fact that the Muslim Renaissance in the subcontinent began after the advent of Sir Syed Ahmad Khan (1817-1898). Even Sir Syed’s mind before 1857 did not differ from that of the Muslim minds which were so conservative. Since Sir Syed, like other Muslim elites, was an aficionado Indo-Islamic civilization, he, like the general Muslim elite, recognized Mughal values ​​as the warp and woof of his identity.

Perhaps that is why in 1847 he wrote a well-researched voluminous book ‘Asar-us-Sanadid’ which not only punctuates Sir Syed’s historical and cultural consciousness but also lays the foundation for Indo-Islamic Historiography. This book is not only an elucidation of the ancient monuments of Delhi but also a modern formulation of the thought of Muslim sufis, poets, and scholars.

When this book was published, Sir Syed’s research work was highly regarded and he was accepted as a historian. The popularity of this book can also be ascertained from the fact that in 1855, when Sir Syed was Sadr Amin in Bijnor, he had compiled Abu al-Fazl’s ‘Ain-e-Akbari’(Administration of Akbar) When Sir Syed asked Ghalib(1797-1869) to write a commentary on the book, he wrote a poetic commentary in Persian, but Ghalib did not like Sir Syed’s editing and advised him that the book contained only old things.

Not only that, Ghalib also urged Sir Syed to be acquainted with the English culture and the blessings it brought. Sir Syed probably did not like this advice of Ghalib. The main reason for not including taqreez (poetic commentary) in the book was that this was the systematic form of what Ghalib had instructed Sir Syed. That is, the odd to English civilization and the scientific blessings it brought was mentioned in that taqreez. But the intensity with which the failed uprising of 1857 struck Indo-Islamic civilization and culture caused a great upheaval in Sir Syed’s thought.

In a mixed atmosphere of insecurity, uncertainty, faith-breaking and skepticism, his way of thinking changed. Establishing a dialogue with the new civilization and the new government was an important task for him. Unconsciously he began to feel very close to Ghalib’s advice. This is where Sir Syed begins his analysis of the nation. Under the guidance of his foresight, he seeks the real causes of the plight of the Muslims. The antithesis of which he saw in the pursuit of modern scientific education. For this purpose Sir Syed founded Gulshan School in Moradabad in 1859. Its five-member governing body consisted of three Muslims and two Hindus. The accusation of narrow-mindedness against him by this attempt of Sir Syed today proves to be baseless.

But Sir Syed’s greatest achievement came in 1875 when he established the Muhammadan Anglo-Oriental College in the Aligarh district of western Uttar Pradesh, a gradual evolution of the Madrasatul Uloom. It was not just a college, but a source of modern thought for the Muslims. It was from here that Sir Syed, for the first time, instructed the Muslims to be loyal to the British government as opposed to the old system. His appeal was vehemently opposed by the Indian National Congress, which tried to give the impression that Sir Syed’s attempt increases the risk of weakening the Indian independence movement and further consolidating the colonial system. At the same time, when Sir Syed became active in promoting scientific education, he had to endure the criticism of his own people.

The people of our nation who were caught up in the spell of the past raised many questions about this practice of Sir Syed. And as soon as he saw it, Sir Syed was declared a loser of religion and Oriental College was declared a den. Another turning point in Sir Syed’s life came when William Muir (1819-1905) wrote a book called ‘Life of Muhammad’. Muir wrote the book in 1861 when he was governor-general of the North Western Province. In it, he objected to three Islamic points: slavery, polygamy, and divorce.

Sir Syed went to England to reply this book which came with the title ‘Khutbat-e-Ahmadiya’ and also translated it into English. There were two major benefits to this approach. The first was that he had the experience of visiting England and watching and understanding the education system there very closely. And second, that William Muir agreed to some extent with Sir Syed’s ‘Khutbat-e-Ahmadiya’. As a result, his friendship with Sir Syed grew to such an extent that he provided significant administrative and financial support to the Oriental College. The main objective of the college was to revamp a rational demeanor among the Muslim through the acquisition of modern scientific education.

The other objectives of this college were to promote the scientific temperament and to strengthen the reasoning basis of the religious knowledge. This kind of demeanor was started by Sir Syed while he was residing in Ghazipur. There he founded the first ‘Scientific Society’ in 1864 which was later shifted to Aligarh after his transfer. The main function of this institute was to translate academic and technical books written in English and European languages ​​into Indian languages. Most of them were translated by Maulvi Chirag Ali(1844-1895). When Sir Syed started fostering his educational thought regularly, a group of his opponents also became active. The majority were Muslim clerics. According to these clerics, Muhammadan Anglo Oriental College was not a center for equipping the nation with modern sciences but a means to convert young Muslims to Christianity. Among those who lambasted Sir Syed was Maulvi Imdad Ali of Kanpur.

Maulvi Imdad Ali had obtained the fatwa of incredulity on Sir Syed as a result of erroneously assisting forty clerics. Maulvi Nazir Ahmad (1830-1912)was also present in the early days of the wrangle but later he became his ally. There is no denying the fact that Sir Syed was despised for more than he was respected. Many of the allegations against him are deplorable chapters of history. The biggest allegation against Sir Syed was that he had become a thrall of English civilization. It is true that Sir Syed was fond of English civilization, but this does not necessarily mean that he was completely deprived of himself and his nation in imitation of that civilization. If so, he would have attended the Agra Durbar in the same way as other Indians. The Agra Durbar, held in 1867, is notable for the fact that Sir Syed was to receive a medal from the British government.

But the rear seats were reserved for Indians at the ceremony, so Sir Syed did not attend. The British government later instructed Mr. William, the commissioner of Meerut, to relinquish the medal to him at Aligarh Railway Station, which Sir Syed accepted. He was a great example of foresight and wisdom. Needless to say, the negative effects of the First War of Independence of 1857 on Muslims were compounded. The war devastated the lives as well as the economic condition of the Muslims. Therefore, Sir Syed considered the acquisition of modern education as the only way to turn the worst economic condition of Muslims into prosperity. That is, only economic stability can give Muslims a proper place in the government.

The practical form of his theory became ostensible when the world went through a major crisis from 1929 to 1932. Bengal was no exception to this economic downturn. The economic situation of the Bhadralok (noble people) is deteriorating and the average farmer, who was mostly a Muslim, is rapidly opulent as the British government waived the debts of the farmers. Because at that time the right to vote depended on economic grounds. Therefore, when the Bengal Presidency is elected in 1937, the Congress gets 54 seats and Fazlullah’s Krishak Praja Party gets 36 seats. Consequently, with the political support of the Indian Muslim League, Fazlul Haq’s party forms the government. This was the first election that resulted in Fazlullah becoming the first Muslim Prime Minister of the Bengal Presidency. This example makes it very easy for us to conclude that Sir Syed was well aware of his time as well as the time to come.